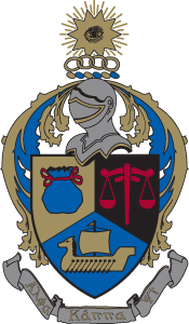 When New York University announced in 1900 that it would open an evening school for instruction in commerce, accounts, and finance, and would give a university degree to those who, having successfully qualified for admission, should successfully complete the course, the announcement was received with doubt throughout the country. The doubt manifested and the need of student loyalty in supporting the new idea were in no small measure the reason for Alpha Kappa Psi’s coming into being.  Prior to 1900, schools of business had been established at the University of Pennsylvania (1881), University of Chicago (1898), and University of California (1898).

The class that entered NYU in the fall of 1902, four months after the first of the new degrees had been awarded by the university, was unique in several respects. First, it was the three-year class; second, all students studied the same subjects; third, there were no textbooks — everything was new and somewhat crude; fourth, Dean Haskins died during the first semester; and fifth, Dean Johnson was promoted to the deanship during the same year.    Other things occurred that had a strong bearing on the early development of the Fraternity. The founders occupied the same seats five nights a week. They became acquainted with one other. Four men from Brooklyn (Bergen, Jefferson, Lane, & Leach), later known as the Brooklyn Four, walked home from school together over the Brooklyn Bridge.

The spirit of brotherhood grew so strong in the hearts and in the minds of the men from Brooklyn that early in the second year they decided to suggest to the other members of their class that something be done to perpetuate it, and Alpha Kappa Psi, the first professional fraternity in business, was founded at an organization meeting on October 5, 1904.

The application was approved and the charter of incorporation officially issued in the name of Alpha Kappa Psi on May 20, 1905.   In 1910, Beta Chapter at the University of Denver was installed; in 1911, Gamma at Northwestern University; in 1912, Delta was established at the University of Pittsburgh. Thus began the national development of Alpha Kappa Psi.   Now, over 230 college chapters and over 75 alumni chapters have been installed, over 140,000 members have been inducted and Alpha Kappa Psi is one of the largest of American college fraternities.